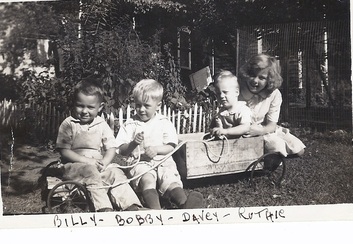 I writing a monthly column called "Young at Heart"

This is my most recent article...


Lately I have been delighted by my ability to recall my childhood which aside from some passionate parental dissonance I consider typical for the 1950’s.  I accept this as another progression in the maturation cycle. It seems that in early life, people have a tendency to look to the outer world and value materialistic things.  Later in life, people begin to look inward in search for meaning and to reconsider values. Reflection prompts a ballet of the brain’s neurons and you can never be quite certain what will surface.

Recently I found this photo in a stowed box marked “memories”. My cousin Billy, that’s me in knee socks, brother Davey and cousin Ruthie and my prize go-cart, “The Flash”. That go-cart was the fastest one on the block until it was retired and sat on the dirt floor of our old one car garage which leaned slightly to the right. The longer I allowed myself to recall life back then, the more memories danced en avant of my mind.

Billy McChesney, my cousin who lived next door got me into deep trouble more than once. He devised a way to carve out the center of an acorn, chisel a small hole in the side where he wiggled in a hollow weed stem. He then packed the homemade pipe with dried grass. We both would often hide inside the old smelly half rotted chicken coop at the rear of our fenced in property for an afternoon smoke.

My grandmother, Emma Shaltis, was baby-sitting one afternoon and decided to check up on the missing lads. She was a large Baltic woman, somewhat bowed legged but marched a very straight path to the chicken coop, determination mortared all over her jaw. Our noses were pressed against a very small, dirty window as we watched her trudging towards the coop, an ankle length apron swaying before her and a tea towel knotted in her fisted hand. Billy swiftly pocked his pipe into a knot hole in the floor and I followed his lead. “What is going on in here”, Grandma said with her Lithuathian accent. In unison we replied with our squeaky voices, “Nothing”.

After the Freehold Borough fire department declared the blaze extinguished and the last of the charred and smoldering coop was leveled, my frustrated father demonstrated how the youngest of 13 Irish children could rant and rave for any hour without breathing.

Other memories of the time I wore knee socks include:

My skinny Aunt Peg calmed one of our chickens on a large tree stump and stroked its neck until it appeared to be sleeping. With one shot she chopped its head off with an axe from our garage. We all jumped when the axe hit the wood. Over the years our gang referred to this episode as the “Chicken Chop”.

Billy and I took both razor sharp axes (my father was a butcher by trade) from the garage to chop up a gigantic fallen willow tree in our backyard. A hurricane had leveled the monster and we were about to finish it off by hacking off its arms from the massive trunk. I was going to clear some wood chips away and said, “Wait a minute Billy, I’m” when his axe slammed through the top of my center finger precisely on the first knuckle. Another Chicken Chop that left the finger top dangling. Blood pumped into the air to the beat of my heart and my mother and our heavy-set house maid, Lilly, both shuddered, screamed and nearly fainted. They wrapped my hand in several tea towels, my father rushed me to the doctor’s office in his two door green Chevy coupe and Doctor Richmond sewed my finger tip on crooked.  The needlework took place under a bright lamp, my wet, red eyes bulging, my chin pressed against the stainless tray. Unorthodox, but having lost so much blood there wasn’t time for a pain killer!

Davey and I climbed a tall tree in the open grassy field next to our house on Avenue A one hot summer’s day. I lost grip and feel off a limb landing flat on my back and had the wind knocked out of me. I can remember hitting the ground to this day with a stunning thump that left me motionless for what seemed like ten minutes. I simply laid there gawking at the undercarriage of the tree and the clouds drifting by. Amongst the umbrella of quivering leaves I could see Davey peeking down at me with pure panic in his eyes.

On the odd occasion, the three guys would chant at cousin Ruthie from a distance and then avoid her for days to come. “Huba huba, ding ding ding, Ruthie’s got everything”.    I think back now and we were absolutely right. What a knockout! Problem was, at that age, we did not know what “everything” was…

Finally, one year all five children in our family received cute but frail bright yellow peeps for Easter. They were all confined to newspaper on the kitchen floor until the peep poop was no longer tolerable. The fluffy chicks all grew to become mature backyard hens, free-range due to the fire, except for the one Aunt Peg decapitated.