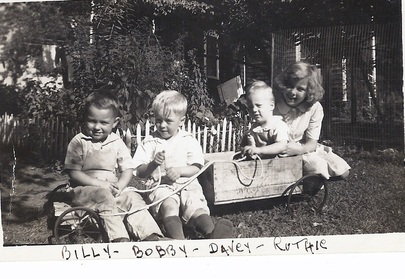 My go-cart was named "Flash" and was the fastest on the Avenue A hill.
I grew up in Freehold, New Jersey.


Billy McChesney, my cousin (on the left) who lived next door got me into deep trouble more than once. He devised a way to carve out the center of an acorn, chisel a small hole in the side where he wiggled in a hollow weed stem. He then packed the homemade pipe with dried grass. We both would often hide inside the old smelly half rotted chicken coop at the rear of our fenced in property for an afternoon smoke.

The Chief Recruiter made a home run enlisting us all into the Navy. He made it sound so glamorous. I am at the top with all my best friends.


Great Lakes in winter was amazing. We had to hang our clothes on clothes lines out side and within an hour everything was frozen solid.

When I first saw my orders for "Antigua" I thought it was in Africa. Little did I know that I would spend the next 18 months on the island of Antigua in the British West Indies.

The island had warm, steady winds, a complex coastline of safe harbors, and a protective, nearly unbroken wall of coral reef. It would make a perfect place to hide a fleet but the Navy had no ships nearby.  I was on a base overlooking the most picturesque sight I had ever seen.

However, in 1784 the legendary Admiral Horatio Nelson sailed to Antigua and established Great Britain's most important Caribbean base. Little did he know that over 200 years later the same unique characteristic's that attracted the Royal Navy would transform Antigua into one of the Caribbean's premier tourist destinations.

The next 18 months I served on the island of Eleuthera in the Bahamas.   Needless to say, I did not see any real action, except at the night clubs on these beautiful islands. 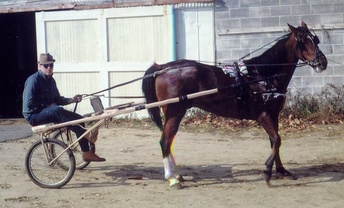 After the Navy, I returned to Freehold and did a number of things. Aside from joining the family run supermarket business I dabbled in horse racing at Freehold Raceway. That's me with my horse, "Killarney Pete".  He was an eight year old that always was in the money, in other words he paid his way...